Discover The Beauty of God

Discover The Beauty of God 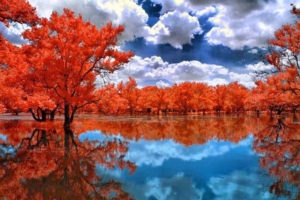 Everyone strives to attain beauty, or sundaram, as it is known in Sanskrit; indeed, God Himself is described as Truth, Auspiciousness, and Beauty. Here we use the term “beauty” in its broader sense. For the vast majority of people, beauty refers to one’s physical appearance. Most feel that to be beautiful is to have stylish clothes, a pleasant face, and an attractive body. Those who are wiser however, realize that real physical beauty itself depends upon radiant health and abundant energy. Anyone who radiates vibrations of health and joy is a source of beauty.
If we were to take one step even further, we would realize that true beauty really lies in one’s mind. From an external point of view while you may be quite beautiful, internally you may remain hollow. Inner beautification is far more important than tending to what is on the surface. The person who has devoted much time to caring for external appearances, but who has paid little attention to beautifying his mind, cultivates a “skin-deep,” superficial beauty.

Profound beauty must necessarily be “mind-deep.” The mind becomes a reservoir of beauty when it thinks joyous thoughts, radiates harmony and peace, conquers anger with love, conquers egoism with humility, and overpowers selfishness with selflessness. Because beauty proceeds from the Divine Self, figuratively speaking it is captured in your personality just as the sun is captured by a clear lake. The more you harmonize your personality, the more you are able to capture that Divine beauty.

Keeping this fundamental point in mind, let me share a simple parable:  Once upon a time, Akbar, the great Mogul ruler of 16th century India, became obsessed with the idea of finding the most beautiful person in the kingdom. He instructed his witty minister Birbal, to find such a person and bring him or her back to the royal palace. Possessing a rather philosophical mind, Birbal understood that this was an opportunity to give the king some insight into the meaning of real beauty. Birbal calmly said, “Give me a little time Your Majesty, and I shall bring before you the most beautiful person in the kingdom.”

The next day to Akbar’s great consternation, Birbal introduced his discovery: a deformed, paralyzed boy who drooled uncontrollably. He was most certainly not what the Mogul emperor had been expecting. Ignoring his king’s shocked expression, Birbal had the boy sit right in front of Akbar who demanded, “What is this?” But Birbal ignored his question and instead asked the boy’s father, “Tell me Sir, who is the most beautiful person in the whole world?”

One must therefore realize that beauty is just a concept which is viewed by each mind in its own unique way. If we take look at how fashion differ among different peoples of the earth, such differences in beauty standards become quite evident. In some countries, people hang weights from their ear lobes to make them long, while others place disks inside their lips to make them resemble drums. In Elizabethan times, men would curl their hair just as women do. Thus, the concept of beauty keeps on changing, with every mind defining beauty in its own way. 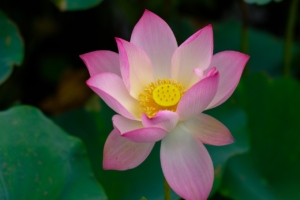 In the unending quest for beauty, your attention starts at the body and progresses as you advance. If you make your body healthy, your mind sound, and your intellect pure, then you will be closer to a more profound understanding of beauty.

Let me share with you another illustration – a true story from the lives of saints and sages. In the 16th Century or thereabouts, there lived a young wrestler called Danurdas who fell in love with a female singer. In the course of time he proposed marriage and she accepted. In his mind, his wife was so exceedingly beautiful that he could not take his eyes away from her.

When they traveled during the hot Indian summer, he would hold an umbrella over her head and walk backwards so that her beautiful face remained perpetually in view. Naturally, people would laugh at such a spectacle, but he did not care what these people thought. On the other hand, his wife felt miserable but could do nothing as it was the traditional custom to follow her husband and whatever he did.

During one of their trips, a saintly person who was a great religious leader, observed this peculiar phenomenon. Finding it quite amusing, he sent his disciples to fetch the infatuated wrestler. When the young man arrived before the saint, the latter said, “I am very pleased to see that you are a lover of beauty.” “Thank you most gracious sage! My wife’s beauty has so captivated my mind that I cannot take my eyes from her,” the young man replied.

“It’s wonderful that you admire beauty so,” the Saint remarked. “I am going to conduct a puja (worship ceremony) before the Deity, and I want you to be present with me. We shall receive God’s blessings.”

According to the story, by virtue of his spiritual power, the mystic Saint transmitted to the young man a glimpse of God. As a result of that blessing, the wrestler was able to behold infinite beauty that pours through the universe like cascading waters, that surges in the ocean, that shines in the sun, that sheds nectar through the moon and spreads itself through the autumn forest causing the leaves to glisten.

The moment his mind captured a glimpse of that beauty, he was completely transformed. “Oh Saint, hereafter God shall be the object of my intense devotion. I will not take my eyes from him.” He and his wife were then initiated his disciples and in time became highly advanced aspirants.

This then, is how one must understand the urge in human personality to be beautiful and to seek beauty. One must hold the correct understanding that behind all beauty it is God that shines forth – God, who is infinitely beautiful. Once engaged in the project of moving toward God, your personality will begin to reflect God’s beauty. God is like a magic wand and as you move closer, you are touched by that wand leading every aspect of your personality to become more beautiful.

As your intellect moves closer, it becomes reflective and moves towards intuition. The moment your feeling aspect catches a ray from the magic wand of God’s beauty, it becomes devotional and flows through Bhakti Yoga to the stream of Divine Love. When your mind captures the Divine ray it becomes meditative; you begin to enjoy serenity and inner peace. When you’re active life touches a ray of that beauty, your actions become Karma Yoga and you do things not to intensify selfishness, but to instead dissolve it. When you live with that kind of harmony in which action, emotion, reason, and will are integrated, then you are moving on to a higher unfoldment of beauty through the personality.

From an advanced point of view, you must realize that though the physical body fades, the inner beauty continues. Great personalities like Mahatma Gandhi, Socrates, and others were admired not for external appearances, but rather for the inner beauty which they radiated. The beauty that expressed itself in Jesus, in Buddha, and in other saints is what people should adore and strive to promote within themselves.

When God is defined as beauty and bliss, no one can be an atheist for anyone who loves joy and beauty is a believer in God. The only remaining concern is how to acquire that beauty and joy in the right manner so that instead of lingering at the surface where beauty comes and goes like the ripples of a pond, you swim into the depths of the surging ocean of bliss and discover the infinite beauty that is God. May God bestow upon you that Divine Beauty in abundance!