Discover The Light of Lights

Discover the Light of Lights 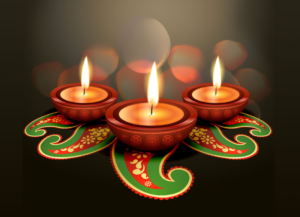 The sages from ancient times have expressed the eternal aspiration of mankind in the following hymn of the Vedas:

Lead me from untruth to truth,

Lead me from darkness to light,

Lead me from death to immortality.

It is this prayer which is enacted in the recent Divali festivity by the offering of myriad lamps or lights to God. Divali comes from the Sanskrit word “Deepavali,” which literally means rows and rows of lights. Throughout all the cities and villages where Divali is observed, Hindu devotees obtain numerous earthen lamps from the potter or from the market. Then oil is put into those little vessels and the wicks are kindled. The lamps are then arranged in different patterns, decorating the houses, the rivers, and the temples. So, within minutes, from one light numerous lights emanate; from one lamp numerous lamps are kindled.

The Mythology of Divali

According to Hindu mythology, Divali is a celebration of Lord Krishna’s triumph over the demon Narakasur and the “marriage” of Goddess Lakshmi and Lord Vishnu.

Narakasur was the son of the earth goddess, but though the son of a goddess, he became perverted and developed tremendous demoniac qualities. The whole earth was under a great tension because of his existence. Lord Krishna waged war against him and destroyed him. Divali celebrates that destruction of Narakasur.

Mystically speaking, Narakasur symbolizes the mind that is after mundane values. Narak a means Hell. If the mind is after materialistic things only, then you are preparing for a miserable existence—a hellish life. But when the Krishna within you destroys that illusion, you no longer go after material things, but, rather, pursue the higher goal of your life—Self-realization.

Most popularly, Divali celebrates Goddess Lakshmi’s marriage to Lord Vishnu. When the ocean was churned in ancient times, many things arose out of the ocean—including Goddess Lakshmi. When Lakshmi appeared, the great gods looked at Her with tremendous fascination. Lakshmi was also looking at them, deciding whom she should choose as her husband. Rejecting those who were looking at her intently, Lakshmi chose as her husband Lord Vishnu, the only one who was not looking at her at all.

In the spiritual field, as you develop Vairagya or dispassion, and your mind is not attached to objects, then great prosperity comes to you. For a spiritual aspirant, prosperity takes the form of Daivi Sampat: Divine qualities. When you develop contentment, serenity, goodness of the heart, peace of mind, and other spiritual qualities, the rows of light are burning beautifully within your personality. And the highest form of prosperity is spiritual Enlightenment—realizing “I am the Self.”

The Mystical Significance Of Divali

All the light-filled celebrations associated with Divali have a profound mystical significance. Light is the symbol of pure consciousness. All religions of the world have instinctively chosen Light as the symbol of Divine Presence, and therefore, lights are burnt in temples and churches, and in all places of worship throughout the world.

Travelers from Darkness to Light

To better understand the powerful symbolism of light, imagine that there is a traveler who has lost his way. He finds himself in a dark, cold, and windy forest, not knowing where to go. Then suddenly he sees a light glowing in the distance and he feels great joy. After hurrying to the spot where the light is burning, he knocks on the door and is asked to come inside and sit by the fire. That light that is burning has removed darkness. It has dispelled his fear. It has given him warmth.

Human life is a journey from the swirling gloom of the world-process to the Eternal Light of the Self. It is a perennial struggle against the forces of darkness that exist in the form of anger, hatred, violence, greed, and the root cause of all maladies—Avidya or ignorance. It is a stream of light that must blend with the Supreme Light of the Self.

God: The Light of all lights

Further, in this joyous festivity of Divali, God is adored as the Light of lights. What do we mean by this?

The Gita has described the Self in the following words:

“He is the Light of all lights, beyond the darkness (of ignorance). He is the knowledge, the object of knowledge and the goal of knowledge. He abides in the heart of everyone. (Ch, 13-17)”

The Path Of Wisdom

The Light of the Self is sought by advanced spiritual aspirants through the path of wisdom. Through the senses, objects are revealed, but it is the mind which provides the light for the senses. Without borrowing light from the mind, the senses cannot perceive objects. So the mind is considered the light behind the senses. But even the mind is not self-luminous; it cannot operate without intellect, which is the light that guides mental movement. However, even the intellect needs to be illumined by the Light of the Self—Consciousness, God, or Brahman—in order to perform its functions of reflection and rationalization. So Brahman or God is the Light of lights. And the ego in man is a fictitious center of the Absolute, sustained by the darkness of ignorance.

A Jnana Yogi (an aspirant following the path of wisdom) renders his intellect subtle by listening to the scriptures, reflecting upon the nature of the Self, and by meditating upon the Self as the reality behind all names and forms. He trims the wick of the ego by negating names and forms; he places the oil of aspiration in the lamp of the heart and kindles the wick with the light of intuition.

The intuitive vision removes the veil of darkness. The Jnani is the highest worshipper of Light. For him the world is a glorious display of Eternal Divali.

The Path of Devotion

The Self is the Light of Love. A devotee approaches the Self by the cultivation of pure love. He places the oil of pure feeling in the lamp of his heart. He trims the ego or wick of its vanity by the practice of self-effacing surrender to the Divine Self. He burns the lamp with the light of love, and he enjoys divine communion in the temple of his heart.

When the heart is illumined by the Light of Love, the world becomes an ocean of light. He sees the Divine Krishna (or the Deity of his choice) in the clouds, in the surging waters of the ocean, in the soft dawn, in the rustling of the leaves, in every beauteous expression of Nature. Yet his vision of Divinity is not merely confined to these, but he also sees the Hands of the Divine Beloved behind the storms of adversities and the dark night of sorrow and suffering.

Para Bhakti (supreme devotion) and Jnana (wisdom) are one. It is the Light of the Spirit that expresses Itself through divine sentiments that surge with universal love and compassion in the Sages, and it is the same Light that expresses Itself through the mighty intellects of Sages, who have presented before mankind the transcendental philosophy of the Vedas and various scriptures.

The Path of Meditation

A Raja Yogi celebrates his internal Divali by placing Shubha Samskaras (pure impressions) in the lamp of his heart by the practice of the various limbs of Yoga. He trims the wick of his ego-sense by the practice of concentration, meditation and Samadhi (super-consciousness). He kindles the light of Viveka-Khyati (intuitive vision), and having dispersed the veil of ignorance, attains supreme freedom from the fetters of ignorance, egoism, attachment, hatred and fear of death.

The path of Raja Yoga emphasizes the culture of the will in the human personality. When the willpower is highly enhanced, a Yogi is able to maintain a serene mind even in the midst of worldly distractions. The flame of Yoga continues to burn serenely within his heart at all times.

The Path of Action

A Karma Yogi kindles the flame of selflessness in his heart and sacrifices the impurities of the mind in this flame. Then this flame is fed by his internal advancement on the ascending heights of meditation, devotion and wisdom.

A Karma Yogi is the worshipper of the Light that shines in every heart. He is the devotee of the Light that expresses itself in all human relationships. Even insulting words and harsh treatment from others fall to his ears like the soft whispers from the Eternal Beloved of his heart—the Divine Self.

Be An Integral Yogi

Be an integral worshipper of the Light of all lights. Let wisdom, devotion, meditation and selfless action blend in your daily life. This is the supreme method of converting your life into a perpetual celebration of Divali.

Expectation for a future condition to be more favorable is darkness; but a silent entry into the depths of the present and recovering the Eternal Self are expressions of the Light.

Egoism, attachment, hatred, and fear of death are the forces of darkness; but humility, detachment, cosmic love, and fearlessness are the glimpses of Light.

Thus, let the lamp of reason burn brighter and brighter in the recesses of your heart, and maintain your spiritual movement in the form of withdrawal from the dark shadows of ignorance into the increasing Light of the Self. Let the world become the surging ocean of Light.

May God bless you with increasing spiritual illumination and may you ever enjoy the internal celebration of Divali in the depths of your heart!