The Austerity of Bhrigu

The Austerity of Bhrigu 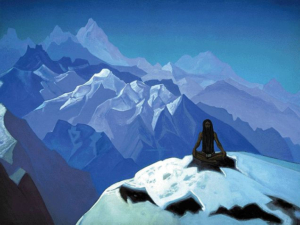 Bhrigu approached his father, Varuna as a spiritual preceptor and asked to be taught about Brahman. In response, his father declared “Brahman is That from which the world has proceeded, That by which the world is sustained, and That into which the world dissolves. So practice austerity and reflect my son, and discover the true nature of Brahman.”

Following his father’s instructions, Bhrigu practiced reflection for a year on what he had studied in the scriptures, as well as on his own experience. He then returned to his father and eagerly stated his conclusion, “Matter is Brahman. The entire world emanates from matter, matter sustains it, into matter the world dissolves.” Hearing this, Varuna quietly replied, “Continue to practice austerity and reflect my son. Austerity is Brahman.”

Bhrigu continued the practice of manana (reflection leading to ever increasing clarity of perception), and after another year of practice he returned to his father with the conclusion that prana (vital energy) is Brahman. Matter in itself is blind and inert, but a subtle energy or vital force moves and sustains every atom and electron in the vast universe of matter. Again Varuna, with a twinkle in his eye, told his son to continue practicing austerity.

Upon further reflection, Bhrigu realized that there must exist a mind behind prana. The world is not in a state of disarray or chaos. There is a tremendous intelligence underlying all things. Bhrigu thus announced to his father that mind is Brahman. Still unsatisfied with his son’s level of realization, Varuna directed his son to continue the practice of manana. The teachings of the scriptures describes the whole universe as resting upon the hoods of Shesha, which is symbolic of the cosmic mind. The thought waves of the mind are the hoods of the serpent, or cosmic mentation that sustains the universe. Not a single atom or particle of matter moves without the operation of Divine Intelligence. Awed by that intelligence, Bhrigu announced to his father, “Intellect is Brahman.” Yet again, Varuna instructed his son to continue reflection.

As his practice deepened, Bhrigu was led to inquire into what exists beyond the intellect. He realized that a deeper part of his being, the unconscious, continues to exist during deep sleep. Furthermore, the bliss of Brahman diffuses through the veil of the unconscious since the ego is temporarily absent in deep sleep and one is closer to God.

Going beyond the unconscious plane of ignorance through the experience of samadhi (super consciousness), Bhrigu had a direct experience of the bliss of Brahman – the true nature of Brahman. When he relayed to Varuna that ananda (bliss) is Brahman, his father became extremely delighted. It was no longer necessary for Bhrigu to practice austerity. Through the process of negating each previous level of understanding, his reflection had finally led him to the highest experience of Brahman.

This story from the Upanishads highlights the need for the sustained and patient reflection in the life of an aspirant. Through manana one is propelled into a deep process of vichar (enquiry into “Who am I?”). As the mind begins to enjoy probing into the nature of the jiva (individual soul) or the reality within you, as well as the nature of the external world, the reality underlying the personality and the vast universe comes to be known. Brahman or the Non-dual Self is the only reality, both internally and externally. As this understanding grows, one’s link with the ego is increasingly weakened, until it dissolves completely into the bliss of Self-realization.