The Cosmic Dance of Shiva

The Cosmic Dance of Shiva 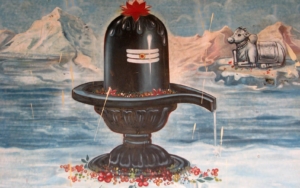 Shivaratri literally means “the night of Shiva,” the night dedicated to the devotional worship of Lord Shiva, and the night of the mystical marriage of Shiva to Uma, or Parvati. On Shivaratri people observe certain disciplines including the practice of fasting. The purpose of this “fastivity” is to starve that aspect of your personality that runs after the objects of the world for happiness, while encouraging your heart and mind to move towards God.

Brahman is the term in the Upanishads for the Absolute Self. Although that Self is One, Brahman in the realm of Maya (Cosmic Illusion) is like an actor who plays three roles: the first is Brahma the Creator, the second is Vishnu the Sustainer, and the third is Shiva the Destroyer.

The process of destruction is like a grand Cosmic Dance. Lord Shiva is ever dancing, and this dance is reflected in the pulsation of your heart, in the movement of the planets circling the sun again and again, in the rising and the setting of the sun, and in the beat, music, and dance of the tides. Shiva’s Cosmic Dance is the rhythm, vibration, pulsation, and timing sustained by all creatures and all beings.

In this dance, things that were old are destroyed and new things arise. Unless there is destruction, nothing new can develop. Thus, demolition and new construction are companions. A seed must destroy itself in order to sprout. As a candle burns there is constant destruction, yet light emanates from the burning of the flame.

The basis of all karmas, which are the cause of repeated embodiments, is ignorance. When ignorance is destroyed, the Jiva, the soul within you, unites with Shiva, the Absolute Self. Sanyasis (renunciates) adore Lord Shiva as the Supreme Deity because the goal of one who has developed the spirit of renunciation is to become free of all karma through the cessation of the world process. It is Shiva within who brings this about. It is His Dance that destroys the illusions and impurities of the mind, thus paving the way to enlightenment.

May Lord Shiva lead you to the glorious heights of Truth – Satyam, and free you of all bondage. 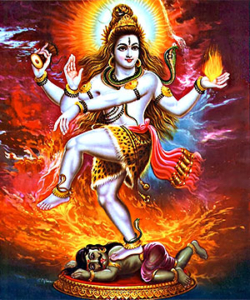