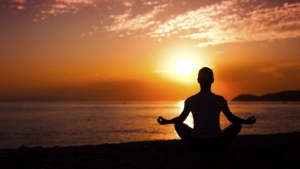 The central teaching of Vedanta is to realize that the innermost spirit is one with Brahman, the Absolute. This unity is expressed by the Upanishadic Great Utterance or Mahavakya: Tat Tvam Asi. “Tat” means “That” and refers to God. “Tvam” means “You” and refers to the individual soul. “You are That.” In Shakespearean English the phrase would be translated as “Thou art That.” The Upanishads teach the art of understanding this profound fact through a process of awakening.

I will now relate to you an episode from the Ramayana that will provide some insight into the mystic process of bringing forth the energy of the soul.

Hanuman was a great servant of Rama and was endowed with truly immense power as a young monkey. However as a youth, he began doing destructive things as he did not know how to handle such power. As a result of these actions, a sage cursed him such that he would no longer be aware of his power until he had to perform his mission for the Lord. At that time, someone would remind him of the great power that lay dormant within him. Thus Hanuman did not know that he possessed this immense power for a very long time.

When Sita was kidnapped by the demon Ravana, Lord Rama asked the monkey king and his army to help search for her. A vast number of monkeys came to the seashore and were informed that Sita could be found by crossing the ocean and entering the island of Lanka. But how would the monkey army overcome this insurmountable problem which confronted them? The army would have to accomplish the feat of crossing the vast ocean. The dilemma began to worry Hanuman and these great monkeys as they sat together on the beach. They knew of no one powerful enough to cross the vast ocean.

There was a great elderly personality among the army named Jambavan. While the troop pondered what to do, he began to tell everyone about Hanuman’s birth as the son of the Wind God and about his amazing powers. Even as a child, he would leap into the sky in order to devour the sun, thinking that it was a piece of fruit. He had such power that he could even bound into space. As Hanuman listened, his body started growing, and continued growing taller and taller until finally he stood up and shook off his old passive personality. His entire body became radiant and filled with dynamic energy and he appeared as if he could swallow the whole world. Thus, it became easy for him to leap across the entire ocean.

The symbolism behind the story is that the Spirit inside of you is like Hanuman. However, its immense energy has been misused due to ignorance. This misuse is why everyone is caught in the world-process and unaware that the power latent within himself is the power of God. While the intrinsic reality within you is in fact Brahman, that awareness of the Absolute is gone due to ignorance.

A fictitious ego has been developed and it declares “I am this body.” Because of this, there’s a great deal of misery and tension in life. It becomes painful at every step because one’s essential nature has been forgotten due to ignorance and the tremendous latent energy that is part of one’s nature is misused.

The Upanishads try to help you recollect what you are essentially. As you study and reflect upon these texts, you begin to understand that the real Self is NOT the ego. When your mind develops the illusion that, “I am the ego personality,” i.e. “I am the body, mind, and senses,” then you are constantly threatened by many things and cannot live peacefully. The world of senses, concepts, and intellect is constantly changing. Hence, there is no security in these. As long as you identify with your intellect, mind, senses, or body, you will be restless. Moreover, you’ll feel that you are just a tiny and helpless personality placed in a gigantic world.

Burdened with helplessness, you cling to the little ego and live a selfish life. Any thought of breaking down the walls of such selfishness seems like a mountainous task. However, when you join in satsanga and repeatedly listen to the teachings of the Scriptures, gradually you’ll begin to reflect upon their meaning. In order to be sensitive to the Divine teachings, you must possess a different type of ear. Ordinary ears are constantly tuning into those conversations of worldly value. When you discipline yourself well however, you develop a subtle ear – one that begins to listen to the deeper meaning of the scriptures.

Once you begin to listen to the teachings in that manner, like Hanuman, you’ll begin to recover and realize that you are not just the body, mind, and senses. The power that you have within you is beyond all imagination. It’s the power of the soul that made you come into the world as an embodied human being and the power that mysteriously drew matter together in such a way as to create your body. As the innermost Self, you are forming your body as well as your circumstances. You have become both the director and the actor in the drama of your life.

As you begin to understand this point, you find that you are not dependent upon conditions and not a slave to circumstances. Spiritual power begins to unfold deep within you and as a result of his power, you develop patience during circumstances that threaten your mental peace. You develop compassion even when confronted by situations which provoke bitterness in your heart, situations in which, without reason, you are insulted or hurt by someone. Such spiritual power precludes any development of ill will in your mind.

When this occurs, you realize that you are becoming a spiritual hero with power to overcome the aberrations of the ego. You discover that you are growing just like Hanuman. While physically you remain unchanged, your astral body is growing to gigantic proportions. You realize that there is a personality within you before which the dazzling sun becomes a mere glow worm, before which the ocean becomes a little pit of water, and before which the greatness and grandeur of all worldly values pale into insignificance. Then you realize that Hanuman within you is growing taller and mightier, and when this happens, you’re able to leap across the ocean of the world process and enter into the Absolute Self. This is the message of Tat Tvam Asi.

This Mahavakya is explained in the following manner in the Vedantic texts. Every term in Tat Tvam Asi has two meanings, literal and indicative. Tat literally refers to Ishwara, while Tvam refers to Jiva. Maya is Sattva predominating Prakriti while Avidya is Rajas predominating Prakriti. Brahman reflecting in Maya assumes the role of Ishwara (the Lord and Creator of the Universe), while the same Brahman reflecting in Avidya assumes the role of Jiva or the individual soul.

By constant reflection on the subtle meaning implied in Tat Tvam Asi, an aspirant discovers his identity with the Absolute and having leapt across the ocean of the world process, becomes one with Brahman!