Shri Krishna Drives the Serpent Kaliya from the Yamuna River

Shri Krishna Drives the Serpent Kaliya from the Yamuna River 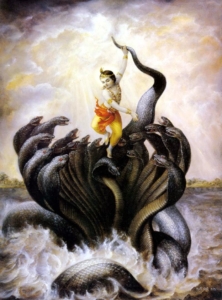 The trees in the forest of Vrindavana abounded with luscious fruits and redolent blossoms. Dancing in the gentle breeze, they sang the praises of Krishna. The river flowed on, glorifying Lord Krishna. The peacocks danced at the sight of Krishna and the deer again and again turned their heads to catch a glimpse of Him. Even the cuckoos sang melodious notes in praise of Krishna.

Every day Krishna went to the forests attended by many gopas to graze the cows. He would go early in the morning and return at the time of dusk when gopis—the cowherdesses—welcomed him with joy, offering him butter and sweet curd.

Life in Vrindavana was wonderful, indeed, except for one thing: a terrible serpent named Kaliya with numerous hoods abode in the subterranean depths of the Yamuna River. As he spewed forth venom from his numerous hoods, the river had become so poisoned that Krishna’s cows died whenever they drank the water. As birds flew by they fell dead from the effect of the poison. Even the spray carried by the breeze caused the trees and grasses to become lifeless. Thus, Krishna decided he must rid the river of its malady.

One day, as Krishna was playing with his friends, he climbed a great Kadamba tree, which had a branch jutting toward the river. Then he jumped right in, causing waves of agitation in the waters. To the dismay and shock of all who feared the dangerous snake, Krishna dove deep into the bed where Kaliya was sleeping. Kaliya woke up with anger and to his amazement saw that the intruder was just a young boy whose body was extremely beautiful and tender. However, no such intrusion into his realm could be tolerated, so the snake began to hiss through all his hoods and emit venom. However, Krishna was unaffected. Then Kaliya entwined Krishna and the whole body of Kaliya rose above the water.

By this time, all the people of Vrindavana, including Krishna’s foster parents, Nanda and Yashoda, had gathered by the banks of the river. From there they watched the fight with great consternation and fear. They saw that terrible giant with numerous hoods apparently crushing Krishna, and thought it impossible that such a tender child could safely escape from the grip of that monstrous snake.

Seeing the adults weeping, Krishna smiled, and in order to give comfort to them, he swelled up his body, inflicting Kaliya with a great deal of pain. Soon Kaliya let go of him but continued to fight. He quickly began to raise one envenomed hood after another, trying to bite Krishna. However, Krishna moved from one raised hood to the next, and crushed each hood with his foot.

To the onlookers it appeared that Krishna was performing a joyous dance upon Kaliya’s hoods. Even the gods and goddesses of the heavenly world came in their aerial cars to witness that amazing dance of Krishna, and they played on their heavenly drums and other musical instruments in tune with Lord Krishna’s dance.

As the dance continued, Kaliya lost a great deal of blood and became exhausted. At that time the wives of Kaliya arose and prayed to Krishna saying, “O Krishna, save our lord, our husband. Do not destroy him.”

Kaliya himself then developed an understanding and love for Krishna and said, “How great am I that your sacred feet have danced on my hoods. I should not be destroyed.” And when Krishna realized that Kaliya had submitted himself to him and had earnestly and sincerely repented, Krishna spared the serpent’s life. However, he asked Kaliya to move away from the Yamuna River and go to live in the ocean.

Kaliya said that he was afraid that if he entered the ocean he would be devoured by his old enemy, Garuda, the great mystic bird that is the vehicle of Lord Vishnu. Kaliya had once offended Garuda, and due to fear of that great bird, Kaliya had taken up residence in a portion of the Yamuna River that Garuda was not permitted to enter.

Krishna allayed Kaliya’s fears by saying that Garuda would not harm him now that he carried the divine footprints on his hoods. Reassured, Kaliya left the Yamuna River and took his family away to abide in the vast ocean. Vrindavana again became the perfect abode for all, with sweet water flowing in the Yamuna and Krishna playing on his flute. 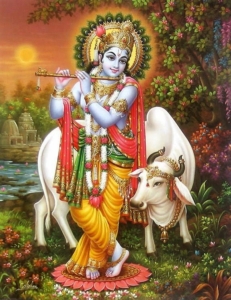 The woodlands of Vrindavana represent the unconscious realms within the mind of an aspirant in which there abound divine impressions of universal love, purity, contentment, peace and bliss. It is the goal of an aspirant to abide in Vrindavana and sport with the Divine Self forever through the attainment of Self-realization.

However, the Yamuna River, which represents the mental process within an individual, has become poisoned due to the presence of Kaliya—the very embodiment of the five kleshas or afflictions which abide deep in the unconscious: ignorance (avidya), egoism (asmita), attachment (raga), hatred (dwesha), and fear of death (abhinivesha).  The many hoods of that Kaliya are the klishtha vrittis, the impure thought-waves of the mind that arise due to the manifold ramifications of those kleshas.

While Kaliya dwells in the unconscious, he goes on poisoning one’s thoughts with lust, anger, hate, greed, and manifold egoistic illusions that keep one bound to endless cycles of birth and death. If the mind were freed of the kleshas it would become nectarine and lead one to liberation. That is the goal of yoga. But how to drive Kaliya out? What to do in order to purify the mind? The story of Kaliya gives that insight.

First let Krishna enter into your unconscious, into your heart, so the process of divine communication commences. The initial stage of sadhana (spiritual discipline) is the awakening of Kaliya, which implies an awareness of your own imperfection, an awareness of the impurities which lie within your personality. That awareness is not pleasant.

When Kaliya is awakened he becomes angry and tries to stifle Krishna. Similarly, when you begin your sadhana and become aware of your impurities, you become terribly agitated. Initially the conditioned mind struggles very hard to overpower any force that tries to control it.

It tries to extinguish the flame of aspiration, the power of the Divine within. However, that power does not allow you to do so. Krishna has awakened Kaliya, he has uncovered the impurities that are hidden within the mind—but he remains unaffected by the venom of ego and the other poisonous kleshas.

In your sadhana, as you continue to persist with satsanga (good association), guidance, and your intensive self-effort, you realize that nothing can stifle your spiritual aspiration. No matter how many impurities you may have, no matter how many negative samskaras  (impressions) exist from previous lives, nothing can stifle it. Once aspiration blossoms or unfolds, it will continue to unfold more and more and it has miraculous power. Even though that Kaliya is a mighty serpent, it still will not succeed in stifling Krishna.

When sadhana  (spiritual discipline) moves into a state of concentration and meditation, the process of handling and overcoming the defects of your personality becomes easier. You develop the art of observing the klishta vrittis or impure thought waves of the mind and at the same time discover the spiritual strength to transform those negative thoughts into positive (aklishta) ones.

As your personality becomes spiritually disciplined, you begin to enjoy the sweetness of divine love and the freedom of luminous wisdom. You realize that every disillusionment is a beckoning finger to freedom. When your egoistic desires are frustrated, you do not become discouraged. Rather you welcome the Divine within and surrender eagerly as Krishna dances upon your egoistic illusions and crushes them.

When all your thought-waves (vrittis) are touched by Krishna’s foot, when they all carry the footprint of God, the illusion aspect of those vrittis is destroyed. When this happens, there dawns an infallible memory of your innermost Self, the awareness that God is your underlying Reality. Once that happens, mind has become unconditioned. The sense of ego has become transformed into the sense of universality.

Krishna’s sending Kaliya away from the Yamuna River to abide in the ocean symbolizes the transition from ordinary egoistic awareness in a conditioned mind to the awareness that “I am all.” Once your mind becomes unconditioned, once you develop ocean-like awareness, the ego in you becomes the universal “I Am”—“Aham Asmi.” It is that transition from the ordinary “I am this body and limited personality” to the awareness that “I am That”—“I am the Self, I am all” that is implied by Krishna’s sending Kaliya from Yamuna to abide in the ocean. The moment your ego moves away from the conditioned mind and establishes identity with the Absolute, your mind becomes absolutely purified and, therefore, Vrindavana becomes perfect.

Kaliya’s fear of the great Garuda is also highly symbolic. Garuda is symbolic of intuition. The conditioned mind with all its klishta vrittis  (negative thought-waves) is ever afraid of facing the intuitive vision of the Self. Thus, in order to avoid this blazing reality, the ego abides in the depths of the unconscious and from there it continues to envenom the mind with its poisonous fumes of impure thoughts and imaginations.

When Krishna within an aspirant subjugates the ego-sense, the mind becomes supremely purified and no longer has anything to fear from the bright light of intuitive vision.

This particular episode from the life of Krishna gives insight into the teachings of Raja Yoga: “Yogash chitta vritti nirodhah.”—“Yoga is the cessation (control) of the thought-waves of the mind.” Through such control, your own heart can become Vrindavana, where you can enjoy communion with God in the most delightful manner. There is nothing in the world as wonderful as being immersed in that atmosphere of Vrindavana, where Krishna plays his flute with eternal sweetness.