The Yoga Research Foundation is delighted to announce our annual Krishna Janmashtami celebration to be held at the Miami ashram of our revered Guru, Sri Swami Jyotirmayananda on Sunday August 18th. We sincerely hope that you will join us as honored guests to partake in the festivities as we celebrate the birth of one of the most beloved incarnations throughout the world. In preparation for the celebration, here is an excerpt from Swamiji on the mysticism underpinning the stories of Lord Krishna as the makhan chor or butter thief. 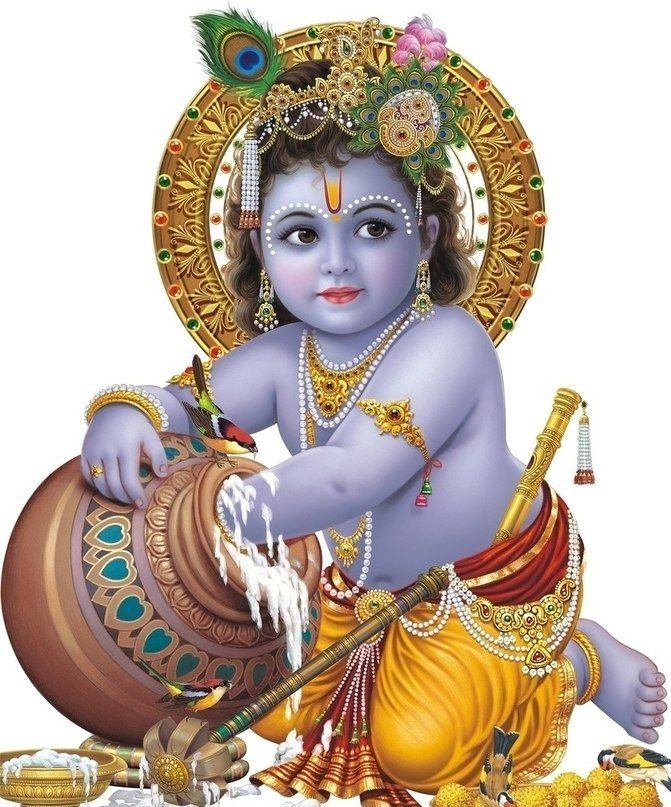 As a child in the village of Gokula, Krishna was a constant delight to all the gopis (cowherdesses) and gopas (cowherds). In those days, however, it was his divine naughtiness that stole their hearts – as well as their butter! In that village of cowherds and cowherdesses, tending to the cows and churning butter from milk were their primary occupations. Krishna’s primary occupation was to get that butter by hook or by crook, and eat it up.

When he came to know that freshly churned butter was available in the home of some gopi, Krishna would take his brother Balarama, and some other cowherd boys, and stealthily enter that place. If the butter was placed in a vessel that was hanging high up from the roof, the boys would climb on each other‘s shoulders until they could reach the vessel. If they couldn’t get the butter out in any other way, they would break the vessel so that the butter would come pouring down. The village gopis came to Yashoda again and again, complaining about Krishna. However, behind all those complaints there was a sentiment of great joy. The gopis were delighted to see Krishna no matter what he did, and even when they came to complain, it was merely a pretext to see Krishna again in his home.

One day, Yashoda directed her maid-servants to do various works in her home while she herself began to churn butter. At that time, Krishna moved towards her and climbed up on her lap seeking his mother’s milk. With great delight, Yashoda stop turning and begin to nurse Krishna, gently smiling as she looked at the face of the child. Suddenly she remembered that she had placed a vessel full of milk on the fire. Quickly she put the child down and rushed to take care of that boiling milk.

Irritated by the abrupt interruption of his tender communion with Yashoda, Krishna found a stone nearby and hurled it against an earthen pot that contain yogurt. When Yashoda returned she found the pot broken and the yogurt spilled. She looked around and saw Krishna standing upon an upturned mortar, eating butter that had been prepared the previous day. He was also playfully throwing butter to some monkeys who had entered their home – as monkeys commonly do in India. 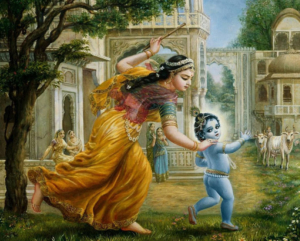 Seeing the great mess that Krishna had created, Yashoda stealthily came up behind him with a little stick in her hand to teach him a lesson. When Krishna saw his mother coming towards him, he jumped off the mortar and began to run. Not to be outwitted, Yashoda took up the chase and ran after him. After a breathless chase she was finally able to catch hold of Krishna. Knowing that he had done something wrong, the child started weeping and rubbed his eyes with his tiny hands, smearing the black unguent that had been applied to his lids. When Yashoda saw that her child was terribly frightened, compassion welled up in her heart and she threw away the stick. However she was determined to teach him a lesson. So, she picked up a little piece of rope and started tying him with it to hold him in one place.

To her surprise that rope fell short by two inches. So she found another piece of rope and joined it to the first. Again the rope was too short by two inches. Yashoda then gathered up all the little pieces of rope that were around and joined them together, but each time she tried to tie him there was never enough length. Seeing Krishna swelling up in that fashion so that he couldn’t be tied, the other gopis around all began to smile.

When Krishna saw how hard his mother was trying to bind him and how, in doing her best in this project, she had become extremely tired and full of perspiration, he stopped his naughtiness and finally allowed himself to be tied up and bound to a nearby mortar – a wooden block used in villages for husking wheat, rice, and other grains.

To better understand the profound meaning of the apparent naughtiness of Lord Krishna as a stealer of butter, we must look more deeply at the nature of human feelings. For the vast majority of people, feelings are full of impurities. In trying to fulfill the urge to love and be loved, countless feelings arise in the heart and individual souls move on from one embodiment to another, encountering lots of illusions and frustrations. Only when one’s feeling is purified will the soul discover God as the object and source of Supreme Love.

Impure feeling, figuratively speaking, is like un-churned milk. Through the intensive practice of spiritual discipline, meditation, prayer, and selfless service, that milk of human feeling is churned until pure, divine feeling – the butter – emerges. Divine feeling does not dawn on a person easily or accidentally. Your whole personality must undergo a tremendous change. There must be great discipline and a highly advanced level of integration. Then, and only then, a true yearning for God emerges in your heart.

When one begins to experience the need for God without any reason or rhyme, a need as spontaneous as a mother’s need to love her child, then that is the beginning of true devotion. When you are yearning for God without any limited objective, but as an expression of purest love you have given rise to butter within your heart.The moment that butter, or purified feeling emerges within one’s heart, God stealthily enters to steal it. Wherever it is, he will come, and you will experience his divine presence in a thrilling fashion. Krishna – the makham chor, or butter thief – is chief among thieves. Even if you keep your feelings enclosed within a vault, Krishna knows how to open it.

The imagery of Yashoda running after Krishna and then eventually being able to catch him and tie him up presents beautiful mystic symbolism for an aspirant. The project of every spiritual seeker is to capture God within his heart. God is always there, but due to ignorance, you are unable to experience his presence. You must become aware of him and capture him by your conscious experience. This is not an ordinary task. The immensity of this project must be well understood.

Like Yashoda, as an aspirant you must put forth all your effort in capturing God, in bringing him to your heart. Although every rope of devotional feeling that you have – every effort that you make – seems to fall short, do not cease your efforts. When you have done your best and used, figuratively speaking, every piece of rope available to you, Krishna by his grace will allow himself to be captured. When love in the human heart reaches that state of purity – when it becomes free of egoism, attachment, hatred – you are able to tie up God by his waist and he cannot run away.

By allowing himself to be caught, Krishna reveals the fact that although he is beyond this world, although he is infinity and eternity, it is by divine feeling that he can be captured. Such is the miraculous potentiality that exists in every human heart.

Yashoda experiences the joy of catching Krishna, and thereby she excels the greatest of personalities in this world. She excels intellectually advanced philosophers, scholars who have dry knowledge of Vedanta, people who have practiced lots of austerities and are endowed with many psychic powers. Love of God excels all. You may have many attainments, but if you have not churned the butter of Divine Love and devotion, Krishna will not enter into your heart. You will not have the unique thrill of communion with God.

We hope that you enjoyed this brief excerpt from Mysticism of  the Srimad Bhagavatam.  If this teaser has inspired you to seek additional insight, then we look forward to seeing you on Sunday as Swamiji delivers his Janmashtami message. The festivities begin promptly at 5 PM so be sure to get there early if you have seating preferences. For a much deeper and more profound understanding of the glory of Bhagavan Sri Krishna, then be sure to pick up a copy of the text.