The Great Conqueror of Death

The Great Conqueror of Death 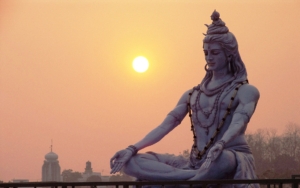 This Vedic hymn expresses the innermost urge for immortality which abides in the hearts of all men. Life is a continuous struggle to overcome death and to attain immortality. Every action, every experience, and every condition of life are phases of one’s evolution leading to the shining sea of immortality, beyond the darkness and delusion of the world-process.

This hymn, adoring Lord Shiva, was revealed to the ancient seers during long hours of communion with the Self. The lotus of divine experience bloomed in the clear lakes of their hearts, inspiring them to compose this verse and many other verses abounding in the Vedas, and then to present them to the world as keys to open the secret treasures of mystic values.

It is called Maha Mrityunjaya Mantra, meaning a mystic verse which is the great conqueror of death. Maha means great, mrityu means death, and jaya means victory.  Any method that prolongs life is a conqueror of death. However, this mantra is called “Great Conqueror” because it confers Liberation, which is the complete cessation of birth and death.

Lord Shiva is the Absolute Self presented in personified form. Like all forms of Divinity revealed by sages, Shiva’s form is a highly mystical and poetic representation of the Absolute. His head is generally covered with matted locks. Matted locks represent mysteries of spiritual life. They also denote the chains of Himalayan Mountains, which symbolically represent chains of spiritual thoughts, the sublime thoughts that arise out of profound meditation.

Further, Lord Shiva has the stream of Ganges flowing from His head; that stream represents wisdom. He also holds on His forehead a crescent moon, which is the symbol of mastery over the mind. The mind, in most people, goes on waxing and waning; but in Lord Shiva it remains a crescent shape all the time. It is eternally under control.

The snakes on Shiva’s body represent psychic powers, and the ashes from cremation grounds that cover Him remind one of the mighty power that destroys the world-process by the fire of wisdom. Although artists portray Lord Shiva, the Destroyer of the universe, as a terrifying personality – a ghostly being decked with ashes from cremation grounds, with ghosts as His attendants – to aspirants Shiva is the embodiment of sanyasa or renunciation, and He is adored as the embodiment of auspiciousness and gentleness. 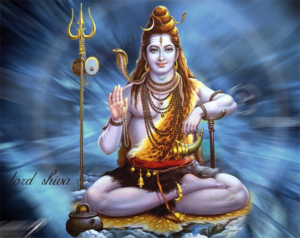 Finally, according to the mystic stories of the Puranas, Lord Shiva has a third eye, which, although normally closed, is opened when needed to carry out His Divine destruction. According to the Puranic story, this great Deity was once practicing intense austerity and meditation, and was in deep Samadhi. At that time, Cupid God with all his army of temptations came to distract Shiva from that Samadhi. After they had unsuccessfully exercised all their charm and power, Cupid finally discharged his flowery arrow at Lord Shiva. Lord Shiva then opened his two eyes and looked around. Then He opened his third eye and fire flashed from His forehead, burning the Cupid God who was hiding in the bushes. Since then, according to the story, the Cupid God exists in an invisible form. Shiva’s third eye, as indicated figuratively in the story, is symbolic of intuitive vision, which destroys ignorance, the source of desire and the cause of the world-process.

Although Maha Mrityunjaya Mantra is generally described as the remover of obstacles and the prolonger of life, when you meditate on the Mantra’s deeper meaning and adore the Self in the form of Lord Shiva with profound understanding, you will attain no less than the highest goal of life – Liberation. Let us then study the Mantra word by word and reflect upon its deeper meaning:

Om is not an essential part of this Mantra, but it has been added to enhance its effect. Om is the symbol of the Absolute, or God, and it is a mystic formula for invoking that Supreme Self. Any work or spiritual practice that commences with the utterance of Om is rendered auspicious.

Tryambakam means the three-eyed Deity. As discussed above, Lord Shiva is portrayed as having three eyes. Two eyes see the practical reality of the world. The third eye transcends this world, representing intuitive vision that destroys the world-process. So Lord Shiva has three eyes, implying that although He sustains this practical world and looks after all the practical realities of life, through His third eye He transcends all and is ever established in the Absolute Self.

Still another ancient interpretation of the term Tryambakam is given by the Sanskrit term Tristrah Ambikan Yasya – One who possesses three powers (kriya shakti, ichha shakti and jnana shakti – the energy of action, the energy of desire, and the energy of knowledge). These three shaktis or energies are presided by three Goddesses: Durga, Lakshmi, and Saraswati. Durga is represented as a Deity riding on a Lion, Lakshmi stands on a Lotus Flower, and Saraswati rides on a Swan. The esoteric meaning is as follows: In the first stages of spiritual evolution, an aspirant has to break the gross obstacles in the form of lower nature. Anger, greed, lust, pride, and other evils are gross impurities. The spiritual energy assumes the role of Durga in this stage and destroys the demons of anger, greed, and other evils.

Then, with the destruction and sublimation of the gross energy, the Lotus of Spirit unfolds in the heart of an aspirant. The bees of excellent virtues are attracted to the blooming lotus. Then spiritual energy assumes the role of Lakshmi and grants the object of desire and prosperity, both materially and spiritually. The last stage of the spiritual journey is illumined by the grace of Saraswati, clad in a white shining garment. Saraswati is the advent of knowledge that dispels all darkness from the heart. She rides on a swan, the symbol of discrimination, and she bears a Vina, which denotes the music of the Soul.

Thus, Tryambakam is that One who possesses these three shaktis. He is the Supreme Lord.

Yajaamahe means we propitiate, adore or worship that Deity. Propitiation is a process by which an aspirant brings about the union of his soul with the Divine Self. The individual ego born of ignorance is dedicated to that Self. It is poured as an oblation into the shining fire of knowledge that burns in the altar of the heart. This is the highest sacrifice. Yajaamahe indicates surrender, self-effacement, Divine communion, and Divine absorption. With the sublimation of the ego, the aspirant becomes conscious of the surging of the cosmic life.

The bud of the individual soul blossoms when it receives the rays of divine wisdom and the showers of divine grace. The emanation of its fragrance comes with the unfoldment of the latent powers of the soul.

This term means fragrance. Just as the fragrance of the rose, jasmine, queen of the night, and other fragrant flowers delight the heart, so too, with the unfoldment of the Spirit, the lotus of the heart blooms and a celestial fragrance emanates in the form of cheerfulness, serenity, purity, cosmic love, compassion, satisfaction, and other divine qualities. 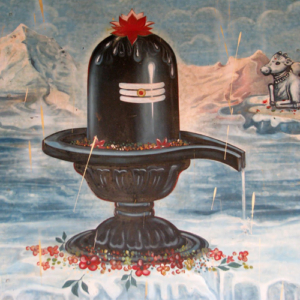 These virtuous qualities are due to the presence of shubha vasanas or shubha samskaras – spiritual impressions based upon goodness, impressions born of samadhi that give rise to experiences of lofty feeling and thoughts, of selflessness, non-violence. If you develop such impressions your personality wears a divine fragrance – one, however, that is totally different from cosmetic fragrance. That is the spiritual aroma that great men leave behind after they die – the fragrance of the soul.

These terms mean the increaser of nourishment. Nourishment refers to integration of personality. Your personality has three great factors: reason, emotion and action or will. When you receive Lord Shiva’s grace, these three become well balanced and Pushti or nourishment is enhanced. When a fruit develops, Nature enhances ripeness and grace in the fruit. Similarly, as you grow and mature you are like a fruit and Lord Shiva causes that fruit to ripen. A Saint is a ripened fruit in the tree of the world-process.

The Divine Self is the possessor of prakriti or nature. This divine energy is the source of all nourishment, whether it is of the body, the mind, or the soul. Even if you are in the most adverse conditions, even if you are suffering from the worst malady, turn your mind to God who abides in your heart, and feel that He is infusing you with strength, that He is vibrating in every cell of your body, that His joy is coursing through your veins. You will be relieved of all troubles.

This term refers to a vine-like plant that bears fruit like the cucumber or pumpkin. As the fruit grows, the plant sustains it; but when it is mellowed with sweetness, when it becomes truly ripe, it drops off spontaneously and detaches completely from the mother plant – and cannot be brought back into it again. Similarly, every individual is like the growing cucumber in the creeper of the world-process. The world-process is described as a creeper because it has many branches or tendrils and it catches hold of everyone through karmic entanglements. By Lord Shiva’s grace you mature through personality integration, develop divine virtues, and the moment comes when you detach from the world-process and never return to it again. That freedom from the bondage of ignorance is the great climax of spiritual movement – Self-realization.

These words mean “Liberate us from the bondage of death.” Death is the symbol of darkness that hampers the unfoldment of the spirit. Avidya or ignorance is the source of death. Egoism, attachment, selfishness, etc., are the meshes of death. The entire world-process is a widespread snare of death. Life is a ceaseless battle against death. Spiritual life leads to the victory – the attainment of immortality.

These words imply “Lead me to immortality. May I not be separated from the immortal abode of the Self, Brahman.” A common fruit falls down and perishes, but not the fruit of the soul that grows in the creeper of the world-process. Having been liberated, it falls into the shining ocean of Bliss. It enters into the Supreme Self even as a river enters into the ocean. The soul acquires perfection by transcending the mind, the intellect, and the senses. It is established in its essential nature of Sat Chit Ananda – Existence, Knowledge, and Bliss Absolute.

Thus, the short but powerful Maha Mrityunjaya Mantra is a most exquisite flower in the garden of the Vedas. It bestows upon it devotees the enjoyments of the world as well as Liberation. It fulfills human desires and aspirations, awakens love for the Supreme, decks the soul with excellent virtues, and liberates it from the wheel of birth and death.

May you repeat this mantra regularly with insight, feeling and devotion, and may its divine potency unfold in your heart and lead you to immortality!