The Importance of Guru by Swami Lalitananda 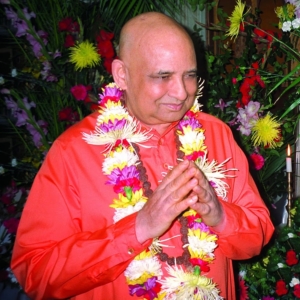 The Importance of Guru

The steadfast advancement leading higher and higher on the spiritual path is largely dependent upon Guru and Guru’s guidance. The human mind is a paradox because of its tender sensitivity for spiritual advancement on one hand, and its crab-like clinging to the objects of the world on the other. Such being the case, it is not possible for an aspirant to gain insight into the sutler teachings of the Upanishads and other Vedantic scriptures without the help of Guru.

In every system of mysticism, a great importance has been given to the succession of teachers and disciples who have maintained that system. In the Vedantic tradition this succession is recognized with deep devotion.

The wisdom of the Upanishads is like a luminous lamp which has been kept burning by a succession of Guru and disciple. A Hindu verse says, “I offer prostrations to Lord Narayana, Brahma, Vasistha, Shakti, his son Parashara, Vyasa, Suka, Goudapada, Govindapara, his disciple Shankaracharya, his disciples Sri Padmapadacharya, Hastamalaka, Totaka and Sureshwadacharya, and all Brahma Vidya Gurus.”

According to the Vedantic tradition, the original guru is Narayana – the Divine Self manifesting as Lord Vishnu. Lord Vishnu taught the wisdom to Lord Brahma (the Creator), who in turn imparted it to Sage Vasistha. Just as one lamp kindles another, and the other in turn becomes the source of kindling another, in the same manner, the most ancient teaching passed on from Guru to disciple, the disciple in turn became Guru who taught it to his disciples. Thus, the purity of the ancient teaching has been maintained in an unbroken succession.

In this lofty tradition of Vedanta, we are especially indebted to Sage Vasistha who presented to the world his prolific teachings in the form of the voluminous works of Yoga Vasistha (the teachings were composed in verses by Sage Valmiki). Further, we are indebted to Sage Vyasa who compiled the Vedas and composed many Puranas to bring the teachings of the Vedas to the world. Among his voluminous works are the Mahabharata (of which the Gita forms a small chapter) and the Bhagavatam (which deals with the story of Lord Krishna). They are shining jewels of wisdom and devotion.

In this exalted line of Gurus, great Sri Shankaracharya became the founder of the Vedanta philosophy as it exists today, and also founded the system of Sanyasa (the order of renunciation) to which our Guru’s Guru, Sage Swami Sivananda belonged. More recently, Sage Swami Sivananda brought the message and teachings of those Gurus to the world through his dynamic personality that harmoniously combined wisdom, devotion, and action, and through his numerous works written in English for the modern man.

Our Guru, revered Sri Swami Jyotirmayananda follows closely the ideal set up by his Guru in a most effective manner. He embodies in himself the ancient teachings in its integral form, and he continues to pour out his boundless wisdom through books, recordings, his monthly magazine, his correspondence, and through his on-line streams. He has already written over 50 books, some of which have been published in other languages.

On this blessed day of Guru Purnima let us bow down to the lotus feet of our Guru Sri Swami Jyotirmayananda, and through him let us offer adorations to all the great Gurus and to the Almighty Narayana Himself. May we be filled with spiritual aspiration and strive for attaining the ultimate goal of Self-Realization.