The Plan of Navaratri Puja

The Yoga Research Foundation warmly welcomes you to our annual Navaratri Puja and Vijaya Dashami celebration. Our festivities commence on Friday September 27th at 7 PM and will continue for nine days eventually concluding with the day of victory – Vijaya Dashami on Sunday October 6th at 5 PM. Join us for ten days of fabulous festivities with our beloved Guru, Sri Swami Jyotirmayananda as he leads us through a splendid exposition of the Devi Mahatmya. If you have not experienced Navaratri Puja at the ashram, it is certainly not to be missed and we sincerely hope that you will join us for all ten evenings of delightful worship and Swamiji’s mystical insight into the Divine Feminine.

In the Mother Worship ceremony, the Divine Mother, or Goddess, or Devi, is worshiped for nine days and nights. Although the Divine Mother is One, she is adored in three aspects – Durga, Lakshmi, and Saraswati. 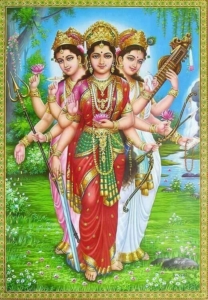 During the first three days of Mother Worship, the emphasis is given to the removal and destruction of the grosser forms of obstacles by Goddess Durga. The heart of an aspirant is tainted by the impurities of innumerable births which express themselves in the form of anger, greed, hatred, lust, pride, jealousy, etc. Such a heart is like a ramshackle old house filled with spiders, roaches, snakes, and hooting owls. These invaders must be routed out and the building cleaned up or leveled, before a proper house can be constructed and occupied. 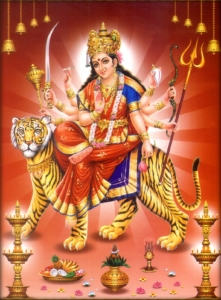 It is Goddess Durga, riding on a lion, who enters the heart of an aspirant and mercilessly slays all the impurities residing within. She levels the old, complexed personality, and clears the way for the construction of a healthier personality, in which Divine virtues can unfold.

During the next three days of Mother Worship, the same Devi is worshiped – but in Her constructive aspect as Goddess Lakshmi. Seated or standing on a lotus bloom and holding lotuses in her many hands, Goddess Lakshmi symbolizes unfoldment. She is seen as the embodiment of gentleness, harmony, and goodness, an aspirant recognizes Her Grace through circumstances of material and spiritual success and glory.

After Goddess Durga has leveled and cleaned up the dilapidated old structure of personality, a constructive process can begin. A plan is made and a foundation is laid down. Then the house is built and the gardens are landscaped. As you see more and more beauty begin to unfold, it fills your heart with joy. This represents the stage in spiritual movement characterized by the advent of Goddess Lakshmi.

Goddess Lakshmi is the sustainer and nourisher of the constructive expressions of the soul. Where 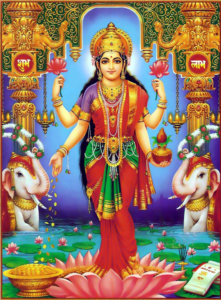 Goddess Lakshmi is the goddess of material and spiritual prosperity. She is symbolic of divine glory or aishwarya. This phase of spiritual movement is marked by the development of divine qualities such as compassion, dispassion, purity, renunciation, charity, universal love, unity, magnanimity of the heart, balance of mind, etc. These are rare gifts of spiritual wealth. Goddess Lakshmi bring steadiness in the chitta (mind) by enriching the spirit and removes vikshepa or distractions of the mind.

The last three nights of Mother Worship are devoted to the worship of Goddess Saraswati, the bestower of wisdom. After Durga destroys the old negative qualities in your personality, and Lakshmi blesses your personality with positive ones, then finally Saraswati – the Goddess of Wisdom – comes forth to enlighten you by revealing the latent powers and potential grandeur of the soul.

Goddess Saraswati is described as having a complexion that is white like the Himalayan snows. She shines effulgently as her garments and brilliant ornaments emit pure, snowy light. The implication is that the Goddess abounds with sattwa, or purity. When sattwa develops in the human personality, it brightens the intellect and leads to intuitional enlightenment.

Goddess Saraswati is further compared to the jasmine flower. This lovely flower is not only white, but is also fragrant. Where there is purity, there is also fragrance and luminosity. These three – purity, fragrance, and luminosity form the apparel and adornments of the Goddess. She holds in her hands a musical instrument known as a veena, symbolic of harmonization of personality. The various strings in human personality must be well harmonized, for when harmonization develops, then Goddess Saraswati shall make her appearance.

Goddess Saraswati is also depicted as seated on a swan, which is symbolic of discriminative knowledge. There is an ancient legend that says that if a swan is given milk mixed with water, the swan will be able to extract the milk, leaving the water behind. Separating milk from water is a difficult task but, According to the legend, the swan is gifted with this ability. Similarly, when the intellect in an aspirant becomes intuitive, it can separate truth from illusion. This form of intellect is a vehicle for the Goddess. So, if a person has developed a pure intellect the Goddess will enter into his personality and will then unfold her majesty through that person. 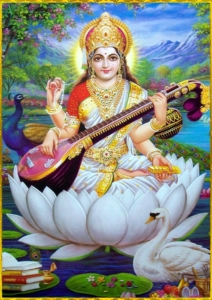 Goddess Saraswati, the Goddess of Wisdom, enables you to go beyond the walls of your ego and look into a transcendent dimension. The moment you do, creative faculties begin to unfold. When your talents unfold and you begin to excel in any field of knowledge or art, then it is considered the grace of the Goddess.

Saraswati promotes knowledge in all its forms, and knowledge is the fountain source of all that is good and wonderful in the world. True knowledge brings an expansion in your consciousness; all evils and miseries are caused by a contraction of consciousness. Ultimately she destroys ignorance and reveals the splendor of Consciousness to the aspirant. That realization of the unveiled beauty of the Supreme confers immortality.

Thus, by reflecting upon the glory of the Divine Mother during the nine nights of Navaratri Puja, we see that she has innumerable manifestations as she guides her child, the spiritual aspirant, in his or her evolution, internally as well as externally. The entire prakriti (nature) is Her sporting ground and all the manifestations of the world, including the earth and the heavens, are Her glories. Her divine ways of guiding the soul are indeed mysterious yet always profoundly compassionate.

Through the first manifestation of the Goddess in the form of Durga, the process of demolishing old and deteriorating structures of personality is taken up, and great joy is derived through it. Through the second manifestation, that of Goddess Lakshmi, the foundation is laid and a new structure is raised. And through Saraswati, the third and most integral aspect of the Goddess, the gardens bloom, trees bear fruit, and through the window of the newly built mansion, the soul is able to glimpse the transcendental glory of the Absolute – beyond the limited realm of time and space, beyond the misery and sorrow of this relative world.

This is the climax of Devi worship – the attainment of self-realization – and it is symbolized by the celebration of Vijaya Dashami, the celebration of the Devi’s final victory over all the demons, on the 10th day of Navaratri Puja. May your lives be imbued with the presence of the Divine Mother and may her choicest blessings shower down upon all.