Turn Towards The Universal Mother

Turn Towards the Universal Mother 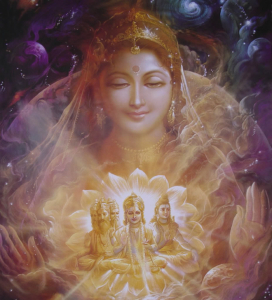 “Ekam Sat Vipra Badhudha Vadanti.” Truth is one but is expressed in different ways by saints and sages of all religions. The same truth is described as the Absolute by the philosophers, as Brahman by the Vedantins, as the Lord or God by the devotees, as Vishnu by the Vaisnavas, as Shiva by the Shaivaites, as Shakti by the Shaktas (Mother worshippers), as Arhata by the Jainis, as Buddha by the Buddhists, as Shunya or the Void by the Nihilistic Buddhists, as Jesus by the Christians, as Allah by the Muslims. The same truth is described as Sri Rama, Sri Krishna, Ganesha, Subrahmanya, Lakshmi, Durga, Saraswati, and other manifestations of the Divine Self.

Brahman and Maya are inseparable, like heat and fire, coolness and ice. Whether one worships the Father-aspect or the Mother-aspect, both aspects are automatically adored. The Supreme Being in fact is neither the Mother, nor the Father; for therein all mental concepts are transcended.

In the highly mystical concept of the Devi Puja, the Mother brings up the child (individual soul), educates him in various ways (through spiritual evolution), and finally leads him to the Father—Brahman—in the form of Vishnu or Shiva. The moment the soul comes before its Father, the duality terminates. Mother, Father and the soul—all become Brahman—the Absolute.

The concept of Devi Puja is indeed most enchanting and captivating. The cool surrender into the arms of Divinity in the midst of the raging battles of life and in the leaping tongues of the fires of adversities is the essence of sadhana or the spiritual discipline that one must adopt during Devi Puja.

God is to be meditated upon as the Mother during the worst conditions of one’s life, and one should recline in the wide-extended arms of the Supreme Consciousness, the Mother, Who has enfolded the soul by Her varied expressions—the physical body, pranas, senses, mind and intellect.

Look within. Turn your gaze inward. Be still and feel the presence of Mother. It is Her energy that courses through your numerous nadis or mystic channels. She has enfolded your soul in Her loving arms. Her loving fingers move through your thoughts, desires and feelings. Her touch courses through your pranas—vital airs, and Her smiles and frowns constitute your joys and sorrows.

As Lakshmi, She is the sustainer and nourisher of the constructive expressions of the soul. While Durga destroys a worn out palace, Lakshmi erects a shining mansion; where Durga removes the rocks, She produces a green meadow; where Durga performs a surgery by removing a diseased part of the body, Lakshmi performs the work of healing. Thus, this Devi, Lakshmi, is the Goddess of wealth, health, and spiritual prosperity in the form of divine qualities.

As Saraswati, She is the revealer of the grandeur of the soul. While Durga breaks down and Lakshmi heals, Saraswati reveals the potential and the latent powers of the soul. Saraswati is the Goddess of speech. She is the inspirer of fine arts, as well as any form of knowledge, whether secular or spiritual. She is the Deity presiding over the pure intellect.

The different aspects of the Divine Mother function in both the lower and the higher planes. As long as the vision of a person is limited by the senses and worldly desires, Her functions are directed towards the relative values of the world.

Operating in the lower plane of worldly values, Durga destroys worldly enemies, but, if displeased, causes manifold miseries in human life. Lakshmi bestows material wealth, but, if displeased, causes delusion, infatuation, attachment and hatred. Saraswati bestows knowledge, but, if displeased, deludes a person by filling his mind with vanity, pride, passion and restlessness. An aspirant should rise over the lower functions, recognizing the Devi in them, and invoking Her with feeling and devotion. It is then that the glorious functions of the Devi reveal themselves, leading the aspirant to the heights of spiritual glory and attainment.

Therefore, all the three aspects of Devi are operating in every experience and in every moment of one’s life. Devi is tenderness in women, hardness in men, patience in adversities, impatience in weak-minded people. She is cruelty in the cruel, and compassion in the saints. She is desire in a worldly person and She is desirelessness in the wise. She is temptation for the aspirants; She is also the strength that overcomes temptations. She is the deluder and the enlightener.

In the story of the Ramayana, when Rama was about to be made an heir apparent, the Devi sent him to the forest to endure intense sufferings for the purpose of destroying the demoniac forces of the world. When Buddha was surrounded by all the luxuries of life, She kindled vairagya in him and drove him away to the forests of Gaya. When Jesus was flourishing in his divine works, She sent him to death through merciless crucifixion. The Mother’s ways are indeed mysterious!